skip to main | skip to sidebar

Faith Illustration: "The 'Christification' of Creation and the 'Elevation' of Time into Eternity." 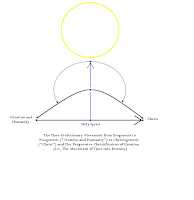 The above faith illustration was inspired by the writings of the French, Jesuit-priest and Paleontologist Pierre Teilhard de Chardin (1881-1955). Teilhard de Chardin can be considered one of the first pioneers in the fruitful dialogue between science and faith. He was a paleontologist by trade and also had an astute understanding and grasp of geology and evolutionary biology. His tremendous love of these scientific fields and his love of faith and theology led him to bring the best of both worlds together in an impressive synthesis that attempted to explain the relationship between evolution, the development of faith, and the role of both in the "progressive" movement of the world toward what he referred to as the Omega Point (the summation of all creation in Christ and the full manifestation of God's Kingdom of love and justice - c.f., 1 Corinthians, 15:27-28). For Teilhard, the natural processes of the world and the "divine process" of God's interaction, communication, and participation with the natural and cultural worlds leads to one and the same terminal point: the New Creation. The faith of Teilhard was so astute, profound, and all-encompassing that he was able to see God's handiwork both in the realm of the natural, physical history of the earth and the cultural, spiritual history of the human community. The reason, rationale, and justification for co-relating the natural and "supernatural" realms is, very simply, that God is the creator of both! The implication of admitting this is that nature and human-nature must, at least to some degree, be "hard-wired" for communion and ultimate union with God.

This faith illustration is intended to summarize and "distillate" Teilhard's vision in a way that can empower Christians and the Christian tradition to engage science, especially evolutionary science, more readily and more fruitfully. In terms of making the Christian faith believable for people of the 21st century, it simply is no longer helpful to disregard or dismiss theories of science, such as the age of the Universe (13.7 billion years) or the evolutionary development of all species (including the human) that are supported by such a large body of "inter-locking" evidence from multiple scientific disciplines (physics, biology, geology, paleontology, etc...). We also need to remember that a "theory" is not a mere "hypothesis" or "best guess" about how nature operates. Even gravity remains a theory and not a fact! Science does not postulate or establish "facts" and can never be expected to do this (this is beyond the methods of science). Science, rather, puts forward hypothesis that are tested and retested and than, if the evidence fits the hypothesis, it gradually develops into a theory that approaches near certainty of fact the more and more it is reaffirmed (as in the case of gravity, the age of the Universe, the evolution of species, and even the theory of climate change - which has approached 90% certainty....about as close as you can get in science to a fact!) So, maybe we should give science a bit of a break, no?

Ok, on to the illustration! Let's refer to the bottom, straight line as the "horizon of time" after the birth, death, and Resurrection of Christ. It is a period characterized by the guidance of the Holy Spirit (or, the Trinity, because wherever the Spirit is, there is both the Son and Father, since the Spirit represents them personally-and-relationally-simultanously....how's that for a mind-bend!!). Note that humanity and creation are now in the process of "passing through" the transformation of the Spirit (mid-point of the spectrum). As humanity and creation continually pass through this mid-point, they move toward the end-point, or Omega Point (Christ). To the degree that creation and humanity move in this manner, the "raw material" of our experiences of creation and time is progressively transformed and "elevated" into the substance of eternity. This is represented by the "bending of time" toward the point in which each "end" of the spectrum (creation/humanity and Christ) meets. When this happens, the full-flourishing of God's Kingdom, the New Heaven's and New Earth will come to term and time will be fully "consummated" and established in eternity. This illustration, of course, does not in any way purport to represent this process perfectly. For example, it doesn't adequately take into account the reality of sin and it's capacity to move us away from the Spirit. However, it is nevertheless an attempt to carry on the very important work of Teilard de Chardin and many other Christian theologians in the important task of engaging in a fruitful and ongoing dialogue with the discipline of science in order to articulate how this world is gradually being prepared for the next. Pat, TOR

Get to Know the Friars Better